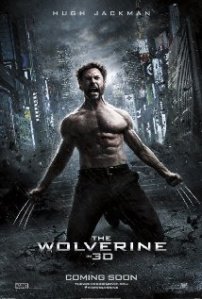 “The Wolverine” did good business this weekend, but not nearly as great as everyone thought it would be. While it was tracking for a $70 million opening, it was only able to nab a $53.114 million opening. This opening should be attributed to the fact that the disappointing “X-Men Origins: Wolverine” disappointed many, so it kept some people away, and audiences are probably just fatigued of this superhero craze and all the explosions. (That makes me question how well “Kick-Ass 2” might do?) Since “Wolverine” did receive an ‘A-‘ Cinemascore, that should say it’ll have good legs. More good news: It’s already earned back its $120-million budget with its $139.2M worldwide tally.

As for the holdovers, “The Conjuring” continues to scare everyone as it had a drop of -46.9% to $22.2 million. That is a great hold for a horror film, where they traditionally face drops over 50%. (“The Purge” faced a drop of 76%!) “Turbo” also held well, dropping 35.5% to $13.74 million. Its box office performance will be thrown off pace when “The Smurfs 2” gets released on Wednesday, and it will be killed by the competition of “Planes”, come August 9th. It’s a very competitive market for animated movies, as “Despicable Me 2” is still going strong with a weekend gross of $16.4 million. “Grown Ups 2” was also in the Top 5 this weekend with $11.6 million, and it’s the 14th Adam Sandler movie to gross over $100 million. That isn’t exactly music to my ears, since I have such a low opinion of “GU2.”

“Fruitvale Station” found its way into the Top 10 with $4.59 million this weekend. “The Way, Way Back” earned $3.44 million and Woody Allen’s “Blue Jasmine” made $612, 064 at just six theatres, marking a career best Per Theatre Average for Woody Allen, and the best PTA of the year so far. Finally, “The To-Do List” grossed a miniature $1.58 million at 591 theatres, which is surprising considering I’ve basically seen the trailer before every comedy I’ve seen for the past month.

What did you all see this weekend? I didn’t get out to the theatre (well, I did last Thursday to see “White House Down”) this weekend, but I’m planning to see “The Way, Way Back” and “Much Ado About Nothing” this week. Maybe “2 Guns” on the weekend. I won’t be seeing “The Smurfs 2.” I just couldn’t take it. I’ll see what happens. I’m thinking of going through a comedian’s full filmography throughout the first half of August and posting the reviews throughout the second half. I’ll make an announcement post soon, but in the meantime, you’ll have to wonder who the comedian is. (Note: Half of their filmography is torture, and half of it I like. So I’m watching half of the comedian’s filmography for your entertainment, and half of it for mine.) Anyway, here’s how much I was off by for each movie in the Top 10: