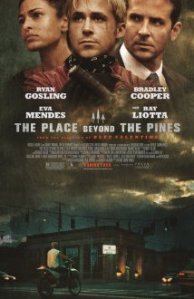 The Place Beyond the Pines

When one thinks of an epic, they might think Titanic, Braveheart or maybe Avatar. Even though this doesn’t have huge sinking boats, large wars or stunning visual effects; this truly deserves to be called an epic.

Derek Cianfrance (of Blue Valentine fame) brings us an small-town epic called The Place Beyond the Pines; a thought-provoking and realistic tale of generational feuds, fathers and sons, and corruption. It’s set in the small town of Schenectady, New York, that follows two families over a period of fifteen years. It’s essentially a trilogy of tales, going from chapter to chapter.

Glanton is a stunt motorcycle rider who, after finding out he has a son named Jason, begins to rob banks as a way to provide for his son and his lover, Romina (Eva Mendes). He does with the assistance of his employer, an auto repair shop owner Robin (Ben Mendelsohn), and his superior motorcycle riding skills. His motivation for this is easy to understand as he wants to provide his son and he sees this as the best way fit. He’s a guy who has his priorities in order, even if it implies reckless behaviour and breaking the law time and time again.

Cross’s motivations are harder to comprehend. He’s an ambitious young cop who wants to make his way up in the police force in as little time as possible, as he’s following in his father’s footsteps. The corruption of the police force itself poses enticing decisions for the young rookie.

The strong third act is difficult to discuss without giving too much away, but there are a few things that can be said. It’s admirably carried by young, up and coming stars Dane DeHaan and Emory Cohen. Cohen plays a character that is an irritating kind-of Eminem-esque wannabe  but he is portrayed adequately and his character is essential to the film.

The third tale explores the idea of legacies and how one split-second decision can send incidental shockwaves through generations. It also explores fatherly influences in a beautiful way; which is a theme that is also highlighted with Glanton and Cross, where Cross has a father figure, and Glanton is the opposite. Corruption and personal gain is best explored in the middle act involving Bradley Cooper’s haunted character. Finally, the bond between fathers and sons and the lengths they’d go to in order to protect their young is very well explored. One of the most prominent themes is, though, is there are (usually) consequences for your actions, admirably said in the movie’s most memorable quote, “If you ride like lightning; you’re gonna crash like thunder.”

The epic crime drama shifts focus a lot, and since it is a trilogy of intertwining stories, it really feels like it could end at any point. In this way, it might work better as a book – but the narrative feels fresh. It’s still one of the lengthy film’s main faults, that the film feels like it’s just coming around the bend to its climax. Thankfully, the ambiguous and hopeful ending at the place beyond the pines is more than pleasing. Some of the characters’ motivations can be also hard to comprehend, but despite the movie’s faults, it’s engaging and it packs a mighty, emotional one-two punch.

The large and talented cast carries the movie extremely well. Bradley Cooper, Ryan Gosling, Rose Byrne, Eva Mendes, Ray Liotta, Ben Mendelsohn, Dane DeHaan (Am I the only one who thinks he’ll, at least, be an Oscar nominee someday?), Bruce Greenwood and Emory Cohen are among the cast, and they help carry the film and they make one heck of an ensemble. The tatted-up Gosling is by far the best of them all. The movie’s at its most booming and usually the most intense when he’s on-screen. He is most deserving of an Oscar nomination, and his powerful performance will remain one of the year’s most memorable. His character is as great and as mysterious as The Driver in Drive, and his performance is as good, if not better; he better not be overlooked by the Academy this time around. Even when he isn’t on-screen, his impact and legacy is felt. Other than Cooper and Gosling, DeHaan and Mendelsohn are the most notable. The score is also very memorable; with Mike Patton’s “The Snow Angel” playing in the background of some of the movie’s strongest and most emotionally sweeping scenes. Who woulda thunk one tune could be so haunting, but filled with such poignancy?

Gosling’s tale is by the far the strongest act of the three, Cooper’s sandwiched between in terms of quality, and DeHaan’s is the weakest, but saved by a fantastic ending. With an epic and beautiful drama like this, “weak” is used lightly – because it is by no means a bad act. They all just happen to pale in comparison to the act where Glanton is the focus. The intense crime drama is riddled with great performances, impressive writing, amazing emotional moments; and no matter how much the film may shift focus from story to story, all in a very lengthy flick, it all intertwines admirably in the end and Cianfrance never loses sight of his stunning and beautiful vision.