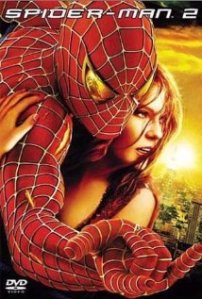 Tagline: This summer a man will face his destiny. A hero will be revealed.

[Spider-Man 2] is a great example of a film where sequels turn out better than the first outing.

Everyone’s friendly neighbourhood Spider-Man is back for this really sweet sequel. Peter Parker is still dealing with his powers and responsibilities and how they often intrude with things of his “normal” everyday life. Parker is also dealing with relationships, and often feels there is just about too much on his feast of a plate. Also, well of course, he has to deal with new villains: Doctor “Doc Ock” Octopus. Octopus came to be after yet another experiment gone wrong (seriously, where do they find these  stupid scientists who always find away to screw the experiment up and turn to a life of crime?!). With the mechanical tentacles that attached to his back now controlling his every move, he tries out his new abilities on the innocent citizens of New York.

The film is quite solid and has memorable action sequences and is pretty well-paced; and the film really doesn’t drag on in many areas or overstay its welcome. This flick has better action sequences than the first and Parker has grown more charismatic as his confidence has grown. In some ways I enjoyed it more than the first, and in other ways not.

I preferred the villain of the first, because the character of Doctor Octopus doesn’t overly interest me, I mean it’s interesting that he’s being controlled by the mechanical tentacles and he’s bent on revenge, I just didn’t feel he was a great villain. And people don’t really watch super hero films for the hero (on most occasions), we’re in it for the villains.

Some of the flick is quite memorable, but other scenes are a little forgettable. It’s fairly well- paced and a great action film experience.

It’s the best film of the Spider-Man trilogy.