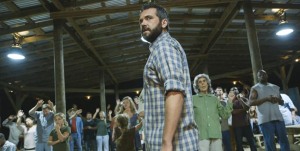 Ti West sends his movie regulars into an isolated village called Eden Parish. Patrick’s (Kentucker Audley) sister has been missing for six months, but out of the blue, he receives a mysterious letter from her (Amy Seimetz). It tells him to take an airplane to somewhere, where there will be a helicopter to bring him to the undisclosed location. He decides to bring a few colleagues along, who work for a  journalism company called Vice. Vice practices immersion journalism, a style in which the journalist immerses themselves in a situation and with the people involved, and the final product usually focuses on the experience, not the writer themself. AJ Bowen portrays the main journalist, Sam, while Joe Swanberg portrays Joe, the camera man for much of the film.

Once there, they are plunged into a situation straight out of a horror film, and real-life; as they find themselves fighting for their lives after the leader of the commune, known as Father (Gene Jones), instigates a mass suicide.

Father wants to protect his people from threats of capitalism and materialism, and all the other things of America that threaten their way of life. Father has a way of getting into the heads of those who are in his presence, even Sam during an interview, in one of the film’s best but bewildering moments. The interview is quick and hard to absorb completely, and I think that’s the point. It feels like The Father really does have a way of getting into peoples’ thoughts. It is easier for him to get into the thoughts of his people. He asks them to give up their worldly possessions to fund his vision. He goes around as a church and picks up people for his cause, where he makes them work and sleep deprives them and easily brainwashes most.

This is Ti West’s modernized way he sees how the events of the infamous events at Jonestown unfolded. Father is the stand-in for the infamous Jim Jones, who led one of the largest mass suicides in history back in 1978. This is an interesting subject for a feature film. It’s slow but it feels like an expert’s interpretation of something that fascinates many, and it features a great finale. The sheer meaning of Jonestown is hard to portray, because one can’t fully understand, but West sure portrays the facts of it well. He has a great understanding of suicide cults.

This isn’t pitched as a found-footage film, but as a documentary. These events are both terrifying and told with great realism. It is also all the more terrifying that it is so realistic, and that it has actually happened – and not just something from someone’s mind. It’s a solid premise. There is enough shock value to keep many, well, shocked. It has the intelligence of a documentary film, and the sheer suspense of a great horror film. It is often hard to watch as well, but it’s a great food-for-thought flick, and it leaves an impact on people’s memory. The ending is predictable, but some won’t be able to predict the insane way in which the events do happen. As someone who is fascinated by the events that unfolded at Jonestown, and as a lover of horror films, I can say this is a great ride, and an interesting look at the depths of religious fanaticism.