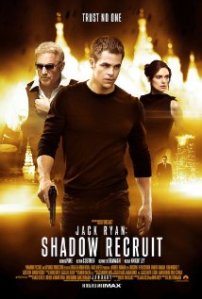 “Jack Ryan: Shadow Recruit” is one of those films that is simply a decent time at the movies; take it or leave it. It has similar action to a lot of other CIA actioners, with an A-list star playing a big name character. Granted, the name Jack Ryan isn’t as big as James Bond or Jason Bourne – but it’s recognizable, nonetheless. This is the fifth film with the Jack Ryan character created by Tom Clancy. I didn’t realize there were so many Jack Ryan movies, but this is a prequel to them all. This is when he is recruited by the CIA. He spends quite a few years as a simple covert CIA analyst, but he becomes an operational agent when he stumbles upon a Russian terrorist plot to destroy the American economy.

Before becoming a CIA analyst, Ryan was an active duty officer in the U.S. Marine Corps, where he suffered an injury to his leg after his helicopter was shot down. I thought this might add an interesting layer to the character, because he might feel the need to push himself extra hard to prove himself because he had to overcome the injury; no such luck. It’s used as a tool to provide a bit more background information of the character, and so he can meet his love interest Cathy Muller (Keira Knightley). She becomes entangled in the danger of the situation when she surprises Jack in Moscow, Russia – where he’s stationed, to audit the main villain of the film, Viktor Cherevin (Kenneth Branagh) because of mysterious stocks that the CIA cannot access.

It’s fairly easy to follow, especially when Thomas Harper (Kevin Costner) tells Jack to explain it like he does not have his high education; basically saying, keep it simple. It’s amusing when films use that sort-of dialogue, because it helps the audience understand it better, too – and it seems to me that’s exactly why the dialogue is structured that way. The plot’s the basic ‘stop the terrorists’ approach with some sub-plots that make sense by the end of it all.

It’s a decent amount of fun because of Branagh’s direction of a few great action sequences (most notably the finale) and a suspenseful recon mission. He makes an interesting choice where his character is walking away from a building and he puts on his sunglasses. In action movies, you might as well expect someone to walk away all cool from an exploding building while putting sunglasses on. He put his sunglasses on, but the explosion never came; brilliant! Branagh’s direction is better than his performance because his character is generally lackluster. The film’s not the fastest getting into it but when Jack kills someone in self-defense and then explains what the villains might be up to, it speeds up quite a lot.

Apparently, this is also a mystery as well as an actioner, as far as the people at IMDb are concerned; but it’s not much of a mystery at all. It’s pretty straight-forward. Anyway, at least the main character keeps the film interesting when the action isn’t going on. The relationship shared between Jack and Cathy is one of those where everything is complicated because he can’t tell her that he is working in the CIA. He can only tell her if they wed, but she doesn’t want to marry him just yet for whatever reason – even though she loves him. Since it’s never really clear why she’s so stubborn about the whole marriage thing, it makes their chemistry a bit harder to grasp onto, and it’s more difficult for them to have great chemistry when he has to be so secretive. It’s funny that these heroes always have a love interest; they must enjoy making it easier for the villain to have a Plan B to use the loved one against the hero or however they go about it.

Keira Knightley is good in her role, because she isn’t sure whether to expect Jack of cheating or not. Chris Pine is decent as Jack Ryan, the hero of our film. Pine is charming, but he has not been particularly noteworthy outside of the “Star Trek” films, at least what I have seen of him. Since I have not seen the other four Jack Ryan films, I am not sure if he’s better than Alec Baldwin, Harrison Ford or Ben Affleck. As a reboot film, and a fun actioner – it’s a decent watch.

When considering the story of “Thor: The Dark World,” it’s much better than 2011’s “Thor.” All I remember from that installment is snippets and sort-of the ending, and I remember it never really being clear who was the villain or not until after about an hour in. Otherwise, it’s forgettable – but Kenneth Branagh did a decent job at introducing the characters. This first sequel is able to get right into the story with a prologue, and there’s a trailer for “Captain America: The Winter Soldier” before the movie starts. (At my theatre, there’s a scene that indicates the movie’s starting – and I thought at first it was the beginning of the movie, but I clued in within a minute… I’m gullible, what can I say?!)

The main villain of the story is Malekith (Christopher Eccleston) who wanted to turn the world dark back in the Dark ages. This sparked a war between the Asgardians and his Kursed dark elves, and the Asgardians won, burying the Aether (the tool that would enable Malekith to make the world dark) where it would be difficult to find. Skip to the present after the events of “The Avengers,” Thor (Chris Hemsworth) is restoring order to the nine realms. He still longs to see Jane Austen (Natalie Portman) once again. Meanwhile, we find Jane back in London, who eventually picks up readings that might be a passageway to Asgard. It’s pretty cool, they find this sort-of vacuum thing in an abandoned building where they throw it down a staircase and comes down from above. The writers have fun with this. Anyway, this all leads to Thor and Jane being reunited, Malekith resurfacing, and Thor setting off on a perilous journey to save the earth.

I think Chris Hemsworth allows Thor to be the most charming Avenger, even if I’m more fond of the sarcastic wit RDJ brings to Iron Man. I like the comic relief in these Marvel blockbuster movies, and Kat Dennings is the main source – and Stellan Skarsgård gets some of the biggest laughs, after being relieved from Loki’s mind manipulations. Speaking of Loki (Tom Hiddleston), his role is a bit more complicated this time around because he is the unpredictable wild card here. He is also the main source of comic relief on Asgard. Natalie Portman is still as beautiful as ever and remains one of my favourite actresses working today – and I love it when she reminds me of that. She embraces the heartbreak of being away from Thor from so long, and also the awkwardness of not being able to tell people. One more comment on the cast: It’s great to see Adewale Akinnuoye-Agbaje (“The Bourne Identity,” “TV’s Lost”) as Malekith’s main henchman, as a tough-as-nails Kursed dark elf.

Some of the wars that happen are a cool change of pace from the first film because more take place in the nine realms rather than on Earth, with the exclusion of the final battle, which is both entertaining and a bit distracting, and you’ll see what I mean when you see it. The distracting part makes it a bit goofier than I might have enjoyed – but it’s still entertaining. I like the Cambridge University setting, because if that was really true damage to the school, I’m sure students will be happy to have a few weeks off from repairs! The other landscapes are really awesome, and there are some really cool weapons used by the Dark Elves I’d like to use. Especially in a video game. Please?

With all the comic relief and simple story, the film has a lighter tone than one’s average comic book adaptation. It still has a good cast and the brotherhood relationship between Thor and Loki is an interesting one because they want to trust each other but they really can’t because Loki is always up to no good, or so it seems. Thor is a noble character who puts the world’s needs, and Jane’s needs before his own. But he doesn’t really have to worry about himself because he has that awesome hammer. This is an entertaining ride, so hop on if it sounds like your type of movie, and if you like humour in your action films. It’s a summer blockbuster treat for the winter months!