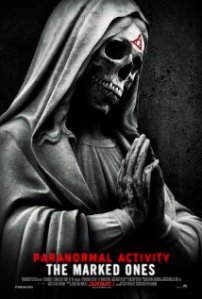 Welcome to a new year of box office predictions! And other possibilities, of course. The only new wide release coming out this weekend is “Paranormal Activity: The Marked Ones,” a sort of spin-off in the “Paranormal Activity” series. It looks okay to me; but it’s not one of my priority films to see in January. Horror films did well last year; and films similar to this open at $28.495 million. The first and third “P.A.” films grossed over $100 million in their domestic runs, the second grossed $84 million; and the fourth only $54 million. It opened to $29 million in October 2012; and since even a direct sequel to the others could only make $29 million, it seems like this will do less. This weekend last year, “Texas Chainsaw 3D” made $21.7 million, so I think this could do in the same range. My prediction for this film is $23 million. 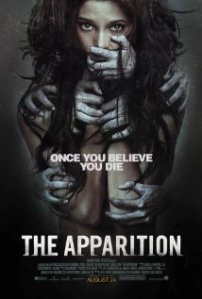 Horror movies have always kept me up at night. I’d watch them, but in my younger years; I saw very few. I believe Darkness Falls was my first horror movie. (Sadly, I don’t remember some of the first movies I’ve seen.) That one kept me up at night – and I tried to rent it again a few years back, but I just couldn’t bring myself to watch it.

I’ve seen more and more horror movies over the years, and I’ve really grown to love them. I still have problems with supernatural movies, though. That is precisely what The Apparition is. I haven’t seen paranormal flicks like Insidious, Poltergeist, or any of the Paranormal Activity movies.

This makes me think I can check those out. The Apparition has successfully wiped away my fear of these kinds of movies. This film is laughable and not scary in the slightest. The concept from the advertising campaign, where if you believe in the ghost it can kill you, is hardly present in the final cut. It isn’t explored. This takes a traditional, supernatural movie route, and ends up being awful. This doesn’t have an ounce of originality, or an interesting concept. Greene looks attractive. That’s a positive. None of these performers can do squat with the screenplay, however, and they all go underused.

The director, Todd Lincoln, doesn’t do well, either. The ending might be symbolism of the studios’ lack of faith in the project. The hands crawling on Ashley Greene’s face are probably the hands of the angry moviegoers who want their money back. I watched this on TV, and I want my time back. Half of this has already left my memory, except the jokes I made during it. The entity ties knots with some of their clothes and makes scratches in the walls. The entity might as well have hands like a wolverine, can tie knots, and is often better with a camera than cinematographer Daniel Pearl.

This couple makes so many stupid decisions, you don’t care for their outcome. At all. I’m sure if a little statue (from the Experiment they conducted earlier in the film) came out of abnormal mold in my house, I’d leave. I’m also certain that if I witnessed paranormal happenings in my home, I would check into a hotel; not pitch a tent in the backyard. Fifty feet from where the events happened. This is where the malevolent spirit, or whatever unscary being it is, shows us its exemplary camera skills.

This might be considered “so bad it’s good” in some countries. One thing is for sure, it won’t be considered good around North America any time soon. It’s mostly just a blindingly boring, dull, laughable and insanely unscary horror movie. A positive does come out of this film: It will cure any fear of supernatural horror flicks.

Robert and Katherine Thorn have it all, and he’s the US Ambassador to Great Britain, when their own child isn’t well, a priest approaches Robert with an idea of getting a healthy newborn whose mother had just died in childbirth. After they relocate to London, strange events – and ominous warnings of a priest – lead him to believe that his son is the face of evil.

The Omen isn’t all that scary today, but it definitely was scarier when it was released. The idea that your son may be a little evil, admittedly, is a pretty scary one. And the fact that Robert really doesn’t know who the child actually is, or the history behind him, makes it even more eerie.

It isn’t as scary as everyone seems to say it is, but the Evil Servant Nanny can be pretty creepy and a little off her rocker. The score makes it for an effective film atmosphere, and definitely does amp up the suspense. For me, there wasn’t a lot of terrifying moments, but it can get pretty intense.

The pacing isn’t great because it’s a little slow, but it eventually escalates to an okay ending. This one’s quite anti-climactic, but as are two of the other Omen flicks.

The Omen offers a pretty solid atmosphere with a nice concept and great score, but it doesn’t have great pacing and has the tendency to get a little boring. It’s the first and best one of the series, really the only really good one, that started up a horror series that was practically the same premise four times. Does that remind you of Paranormal Activity?

Error: Twitter did not respond. Please wait a few minutes and refresh this page.