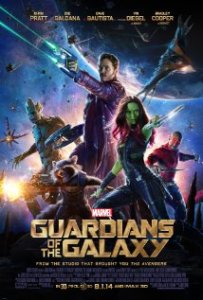 If a time traveller had told me that the writer of Scooby-Doo, James Gunn, would co-write and direct one 2014’s most enjoyable films, I would be hesitant to believe them.

But with co-writer Nicole Perlman, he does so with Guardians of the Galaxy. And it hits a perfect strike in every aspect. The Marvel comic book films’ humour fits this film like a glove.

Its laugh-out-loud funny consistency suits the film’s easy-going tone. The humour is clever and often literal. The simplistic story follows Peter Quill (Chris Pratt), subject of a manhunt after he finds a powerful orb. The orb has caught the eye of Ronan the Accuser (a strong Lee Pace), who is to deliver it to the powerful Thanos.

Ronan, a Kree who takes the beliefs of his people very seriously, has been pillaging planets motivated after his people signed a Peace treaty with the planet Xandar. Djimon Hounsou portrays one of Ronan’s henchmen. His villainous side is fun to watch.

Also on Peter’s tail is Yondu, portrayed by The Walking Dead‘s Michael Rooker, leader of the Ravagers and the man who abducted Peter 26 years ago. His deadly power allows him to control a tiny spear with varying whistles.

Even with the two crews are after him, the film doesn’t feel over-crowded with multiple antagonists. Impressively, this introductory film has great pacing. The characters fit superbly into the Marvel universe, in between the characters of the Avengers group.

I prefer this crew over them, which surprises me because I don’t usually favour these space movies. Peter Quill is a great character and an outlaw who calls himself Star Lord. He’s an average hero with cool gadgets and a great sense of humour.

Chris Pratt brings his charisma and training to the role, after losing sixty pounds to take on the role. There is a familiar character arc with Quill where he has a letter and gift from his late mother that he doesn’t open. Though, he does like music from the 1970’s and 80’s, which enables this to be my favourite soundtrack from 2014.

Gamora, Zoe Saldana, is like a living weapon who works for Ronan. She is also the adopted daughter of Thanos, and her sister, the villainous Nebula, portrayed by Karen Gillan, is badass in her own right.

Rocket Raccoon, voiced by Bradley Cooper who only vaguely sounds like himself, is a bounty hunter driven by money. The character is given poignancy through the fact that he is the only one of his kind – half-machine, half-raccoon, the result of an illegal experiment.

Vin Diesel portrays Raccoon’s best buddy Groot. “I am Groot” is a phrase he regularly says in varying volumes and emotions, actually recording the phrase about one thousand times. Groot is among a species of walking trees who could have just come out of Middle Earth. The quiet character is surprisingly funny. Rocket is like a translator of Groot’s tones. Diesel is just as effective as he was when he voiced the titular Iron Giant back in 1999, also a character of few words.

The final piece of the group is Drax the Destroyer, a great Dave Bautista, who is driven by vengeance for his wife and daughter. Ronan killed them. Money is the group’s main drive, but Groot seems like he’s just along for the ride. Their drives make them relatable, and they work so well because they’re an unlikely cast of characters.

The make-up specialists, in special effects and in general, outdo themselves, especially with Dave Bautista, Zoe Saldana, Lee Pace and Karen Gillan. The story’s heart in such a compelling and easy-going film is just astounding. Due to the film’s great visuals, top-notch writing and its ability to surprise its audience, it just has to be seen.