Phoenix Forgotten is like one of those films that come out of nowhere, but this is because of a quiet marketing campaign. It tries to replicate the success of 1999’s The Blair Witch Project, and it’s disappointingly mediocre (especially with the involvement of Ridley Scott’s production company Scott Free Productions).

Integrated at the centre of the story is the Phoenix Lights, a triangular light formation that was seen from Phoenix, Arizona in March 1997. It’s never been explained, and is the most famous so-called UFO sighting in the world.

The fictional story comes with three teens – Josh Bishop (Luke Spencer Roberts), Ashley Foster (Chelsea Lopez), and Mark Abrams (Justin Matthews) – who disappeared without a trace investigating the Phoenix Lights. 20 years later in 2017, Josh Bishop’s sister Sophie (Florence Hartigan), 26, is investigating the disappearance. She discusses it with her own parents and Ashley’s parents as she makes a documentary.

It’s interesting learning about the Phoenix Lights. It’s famous, but I never heard about it, so it’s intriguing. I thought it was just making a generic UFO sighting and developing mythology; instead, it interestingly blends some truth with a lot of fiction, and the unexplained phenomena has some intrigue. That’s what makes some of the first hour interesting.

Sophie mostly just talks to her parents and other experts who give lots of speculation. They say forgettable stuff, and there are so many boring interview subjects that I found myself forgetting who was who. It’s interesting how Sophie’s parents were affected after Josh has been missing for 20 years with no closure. It’s heartbreaking, but besides them, the emotional connection is non-existent; as the characters are one-dimensional. 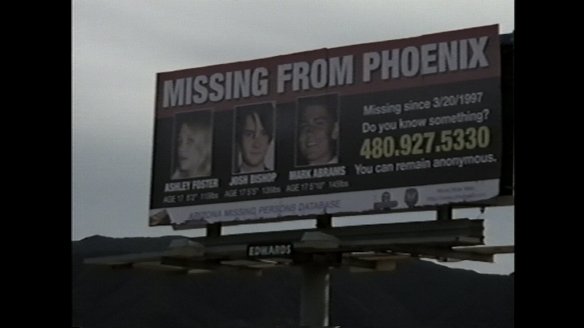 Josh is single-minded and becomes obsessed when he gets an idea in his head. I liked seeing in his room that he was sci-fi enthusiast with X-Files and Alien posters all over his room. Ashley’s more interesting, since she’s open-minded and interviews well as an aspiring journalist. One interview features local astronomers talking about how they think the lights were flares.

Mark just feels like he’s kind-of there, since he has a car. He’s a friend but he’s almost has no dimension. The little-known actors aren’t memorable, but they do serviceable jobs. Chelsea Lopez as Ashley brings some charm.

The cinematography is stronger in Sophie’s documentary, but her film is way less interesting. Her documentary feels distinctly incomplete even when she has a chance to make an ending, and the film doesn’t execute.

It’s also silly that she waits 20 years to investigate the disappearance, and like the documentary, this feels like it’s made a few years too late, especially after the release of The Phoenix Incident in 2015 (a docu-drama about the real-life disappearances). It’s especially late since Adam Wingard released Blair Witch last year, and this is essentially a carbon copy of The Blair Witch Project mixed with a some of The X-Files.

The film’s a puzzle as they try to explain what happened to these 17-year-olds. The mystery’s never been solved because they stopped filming at one point. It’s the one video that promises something happening, as most of the videos are uneventful. Sometimes they investigate the Lights, but other times they just go for a hike hoping something will happen.

The videos are amateurishly shot and Josh annoyingly can never keep the camera on the action, and it’s hard to see what’s going on. The camera’s consistently shaky, but the visual effects are cool when we see it long enough. The filmmakers make it look like the videos were filmed in 1997. It has a VHS quality, and it adds realism.

The horror relies on psychological aspects of paranoia, lots of bright lights and loud noises instead of jump scares, which makes it refreshing. In that way, it does something different from most found-footage films, and part of the reason why I’m giving it a passing score.

The tension is palpable because of chilling sound design. It feels more like freaky, sci-fi scares than anything and when I’m talking about horror, it’s only existent in the film’s final 15-20 minutes when we get the last piece of the puzzle. It’s a good finale.

The first hour has 15 minutes of interesting material, but it’s boring and not scary. Since only a fraction of this is thrilling, it doesn’t work as a feature film. It would be better as a 30-minute segment in an anthology franchise like V/H/S because there’s not enough material here, and Josh’s sister making a documentary in the present day often feels like filler. Director Justin Barber fleshes it out to about 80 minutes and it doesn’t feel like a well-rounded feature. The last piece of the puzzle is the only good part. Otherwise, Phoenix Forgotten is already fading from my memory.